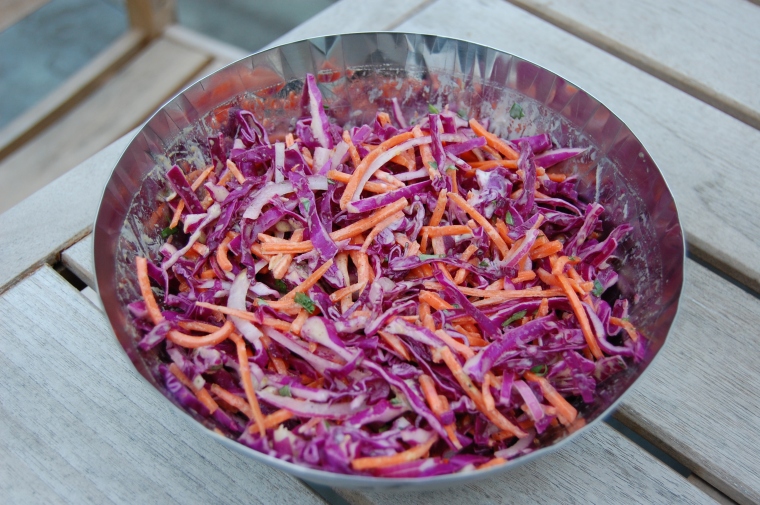 Growing up, coleslaw is one of those things you don’t really like. I was never a huge fan of mayo, and usually coleslaw is just a vessel for people to eat more mayo! Plus cabbage tends to have a more bitter flavor, so as a kid your palette really doesn’t get it.

Later in life I still didn’t find a coleslaw I loved, so when I started really getting into cooking, I decided to come up with one of my own. I will admit it does have a little bit of mayo in it, but its only a small amount!

Cilantro is another controversial flavor, but my biggest beef with it, is that people tend to over use it.  Everything in moderation can be really tasty, but it’s a coping mechanism for many people to add a ton of flavor without having to think. It isn’t my favorite herb, but when used in the right proportion, it can really add some freshness to your recipes.

To make this slaw you will need the following:

Remove the core of the cabbage head and slice thinly.

Thinly slice the red onion and chop up the cilantro.

Mix everything in a bowl including the condiments and oil and vinegar and toss.

This has a lightness and freshness to it that most slaws don’t, and its the perfect pairing with your delicious fish tacos!

I’ve also added in a green or golden delicious apple and taken the onion out of the slaw, and it was amazing on a whole new level!